The French Grand Prix is here with lovely weather forecast which is always a bonus at the Le Mans event. The key areas of discussion for the race weekend are Alex Rins and Aleix Espargaro resigning for two years with their Suzuki and Aprilia teams, Johann Zarco racing in front of his home crowd, riders trying to learn how Zarco is so fast, the superb news of Andrea Dovizioso announcing his future and if Valentino Rossi can regain some momentum even when the Movistar Yamaha is struggling beyond comprehension. Rossi admits that he is slow and this is not a good feeling to have. He is trying to understand how to improve the bike and work through the issues. 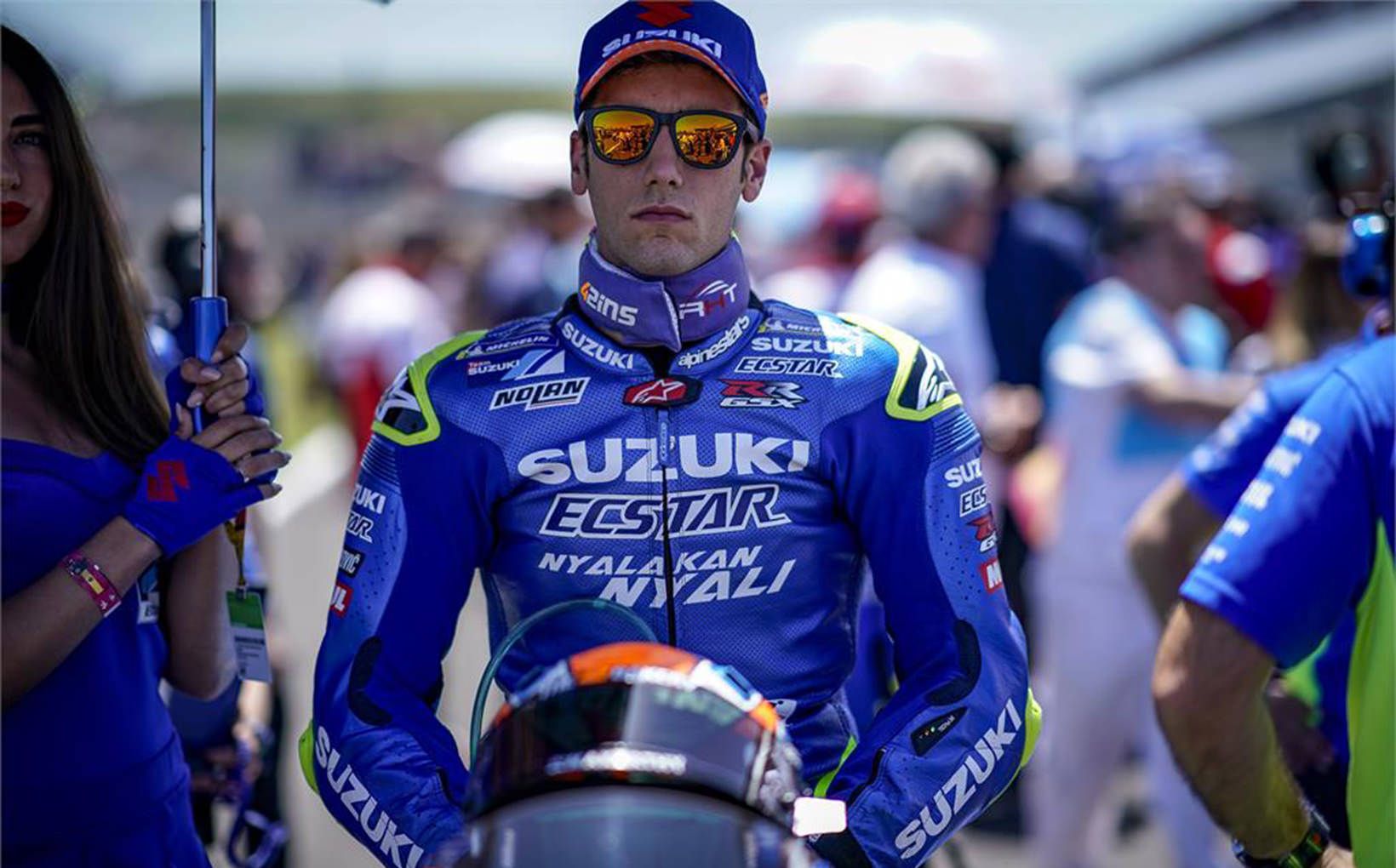 So first up, we had the announcements of Rins and Espargaro signing on again for an additional two years. Both Spanish riders are hungry for glory and want to continue making miles in the sport of MotoGP. It was a sign of relief for Team Suzuki Ecstar who are finally gaining results to smile about and Aleix…. well he needs his team to pull together and produce a bike that actually finishes a race. Espargaro: “I am very happy to stay with Aprilia for another two years. For the first time in my career, I am able to have stability and this is important to improve and grow together. I have a sole objective, an obsession and that is to take the RS-GP to the podium. I wish to thank Aprilia and my entire team. We will continue working at 100% through 2020.” Rins: “I’m very happy about this contract renewal. Even when I was still in Moto2, and I was planning to move to MotoGP, it was always the Suzuki project which looked brightest and most interesting in my eyes. My debut last year was complicated; there was my back injury in the 2016 Valencia test, then the ankle injury while training, and finally the arm injury in Austin. So after only two races we had already been through a very tough time, but I always felt the affection and support of Suzuki and the whole Team. We were able to turn the situation around through being patient, working hard, and being consistent, and finally this year we got the first podium together with my third place in Argentina. But no matter the results, whether good or bad, the mood in the box has always been positive. The project that the Team have set up for me is fantastic, I can fully trust the capabilities of the Company and the Team when it comes to development and improvement, and I’m sure we can continue to aim for big results. Now we only have to keep on working hard to see just how far we can go…” It is really good news for both riders who have showcased their ability to go fast and be a team player and also a leader when required. We really look forward to seeing how 2017 shapes up for two as the pressure of 2019 and 2020 is now removed. The two riders are totally capable of finishing on the podium. 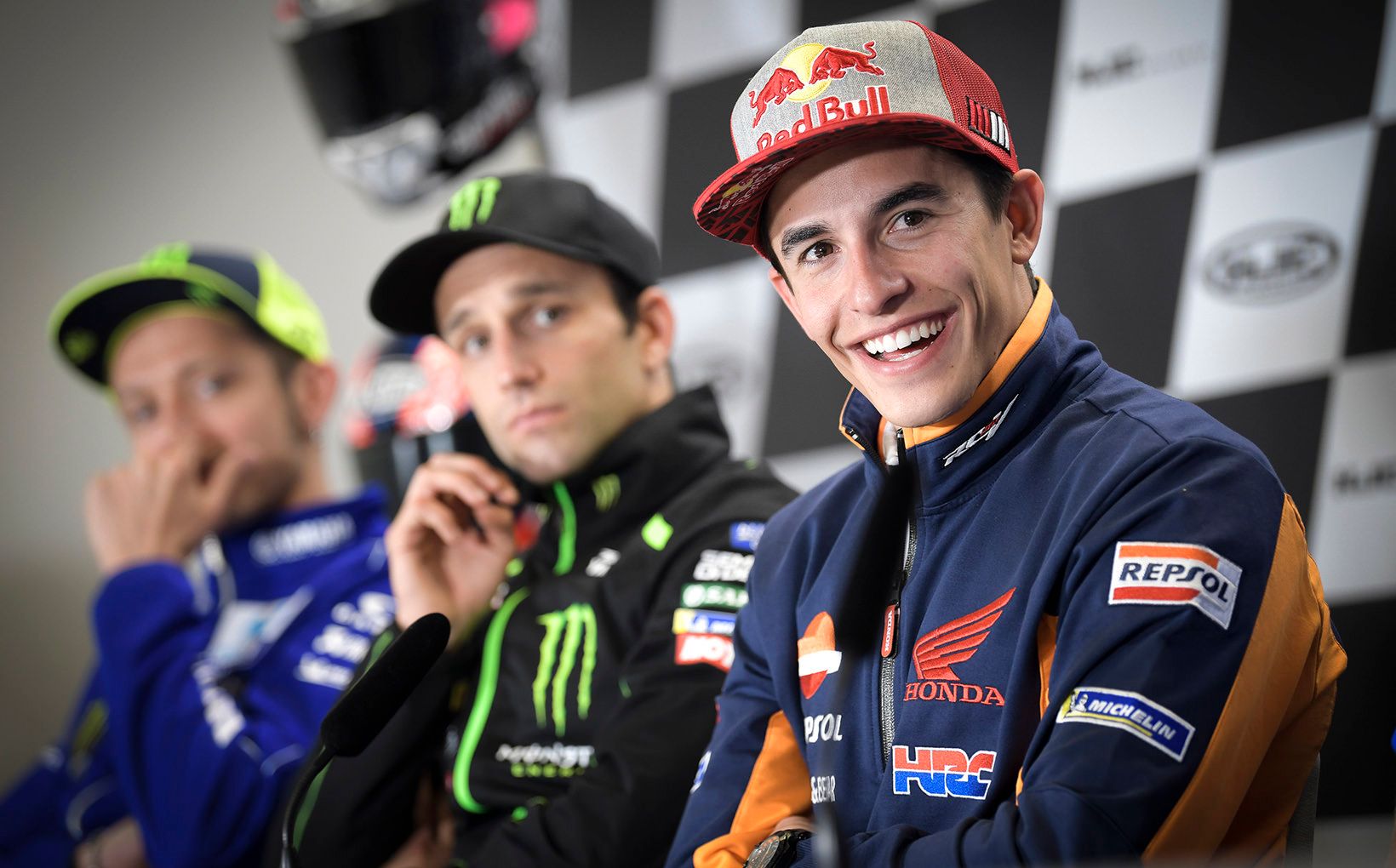 As we turn to Johann Zarco, all eyes have been fixated on the French rider and how well his adaptation to the premier class has been. He has passed with flying colours and probably gets an “A” for every challenge he has been dealt with to date. Zarco is a stand out and this weekend he will have that extra motivation present in the back of his mind as fans from all over France come to cheer and chant his name as he does lap after lap on the circuit. “I keep dreaming about victory. It’s a good track for me and last year the Yamaha was working so well. Our bike is similar to last year so I just need to make it work and do everything perfectly.” Safe to say the Yamaha he is riding in 2018 is just as fast and performing at the level he needs it to be at in order to chase the front runners! Marc Marquez must be prepared for the chomping teeth of Zarco. In addition to this, news just out that the French Grand Prix will remain on the calendar until 2026. It is considered a key event and one that is continuing to grow year on year. No doubt, Zarco will have an opportunity to try win a French Grand Prix as he grows as a rider. 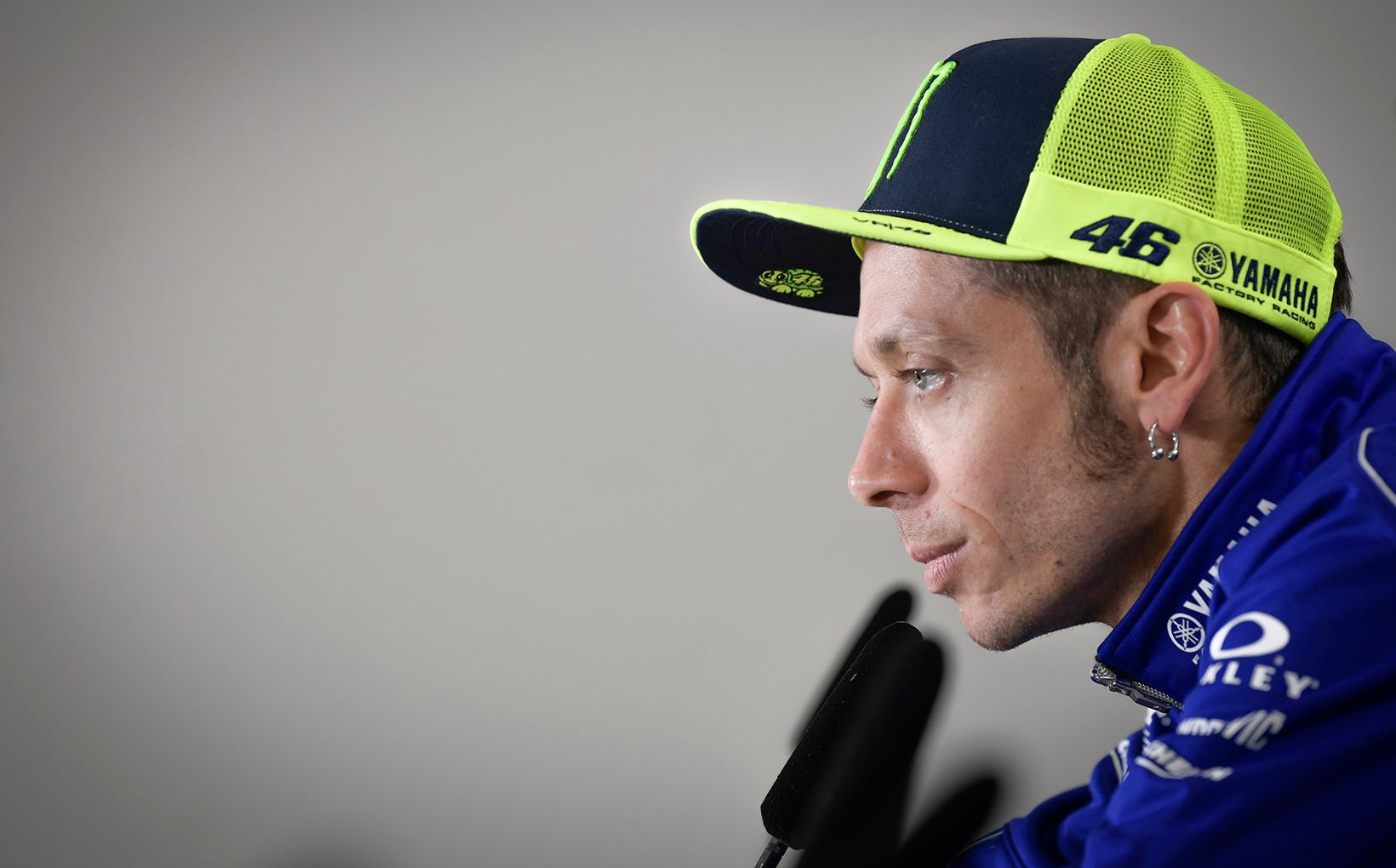 In contrast, the Movistar Yamaha team has not been satisfied with their results to date. Valentino Rossi and Maverick Vinales feel like things are not up to scratch, especially when they watch Zarco fly by them and disappear in to the distance. Right now, the Yamaha riders are suffering when the grip levels are not high enough, the problems to date are a mixture of issues, the engine chosen in preseason cannot be changed and has to stay put, Zarco has the same chassis as the Yamaha crew though a different engine which unfortunately Rossi and Vinales are not able to use as a result of regulations, both Rossi and Vinales agreed on the direction of the team and the challenges that are currently taking place are very hard to stomach. Unfortunately, this is the reality for the factory team. Like lottery, sometimes you win and sometimes you lose. If there is a way to fix the issues, Yamaha is trying and researching no doubt, however, it sounds like these challenges will not be overnight success. 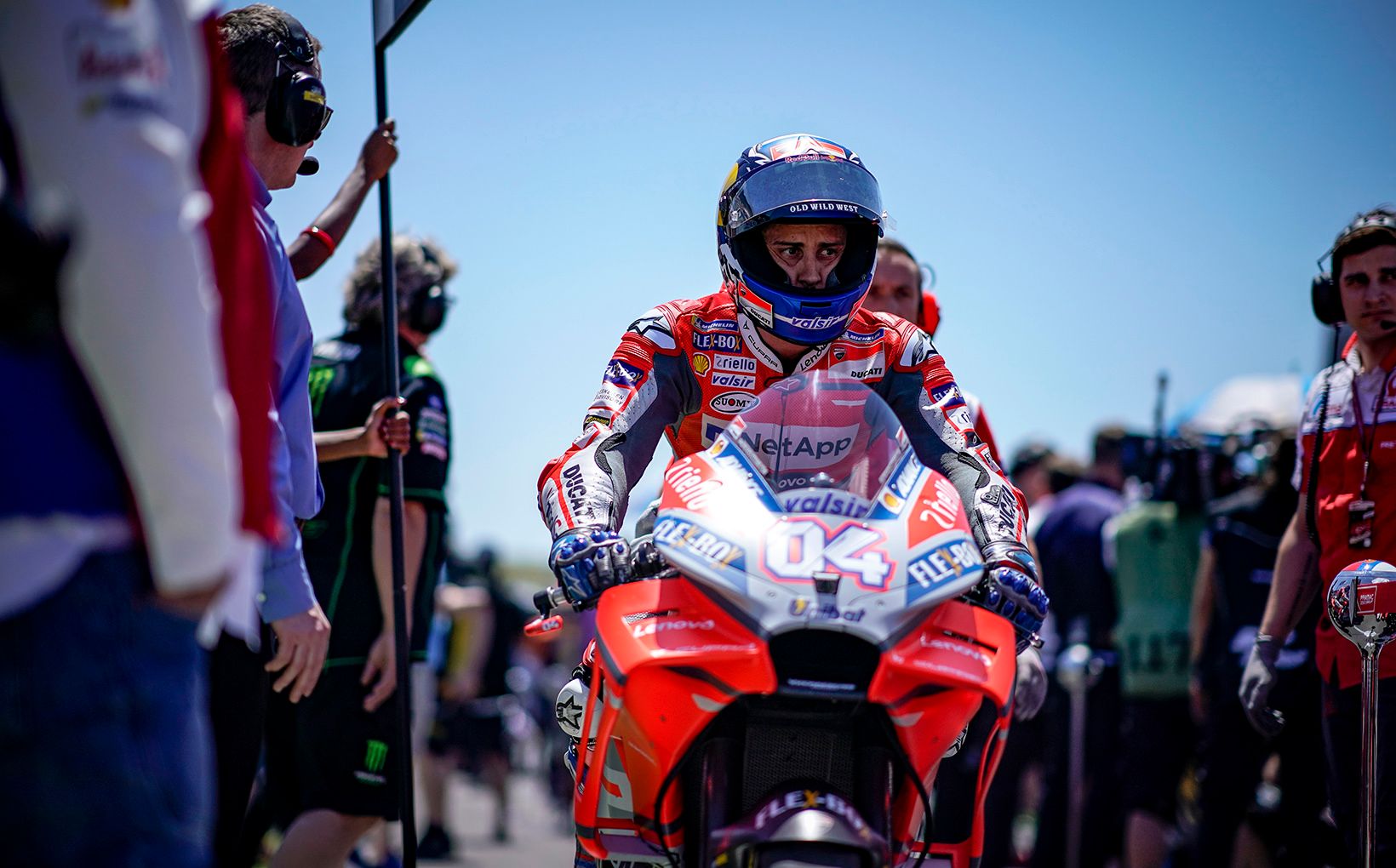 On the other side of the contractual timeline, we have Andrea Dovizioso confirming his future with a two year extension with the Italian factory. The Ducati team are thrilled. On the other hand, Jorge Lorenzo is still in talks with Ducati and possibly other teams. Lorenzo has been linked to rumours of switching to Suzuki. In the reality of the situation, Lorenzo could be exploring Honda as well if Marquez allows it. Just a theory! There is no hiding or pretending that Suzuki have performed. They certainly have achieved the dream start with three podium finishes. However, with those podiums come new restrictions on their testing and research as they no longer have the infinite powers that once existed. So where do you go and what choice do you make as a Ducati factory rider? Do you stay and continue on looking for a title as the bikes become more reasonable to ride or do you jump ship and hope for the best. Right now, the focus will shift to Lorenzo! What deal will the Spanish Spartan sign? The lips of Lorenzo’s crew and manager are closed and we have to be patient as his next move could be a stamp of positivity or negativity for his legacy. The fine print details are key!

We also await news of Jack Miller, Danilo Petrucci, Dani Pedrosa and many more for 2019. The teams are in Zarco’s territory and we look forward to the fight and if certain riders can recover to make their own stamp upon the 2018 World Championship Title. The hard braking, change in direction and the new asphalt are already making us excited for how the story of Le Mans will be told. Tune in for practice, qualifying and the ultimate three course meal of Moto3, Moto2 and MotoGP.